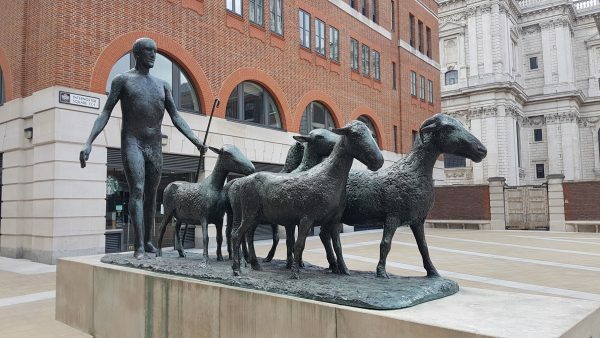 Temple Bar Trust Presents: From the Human to the Divine, A Virtual Guided Walk

City Guide, Ildiko Bita will conduct this fascinating tour. With artists as diverse as YBA, Gavin Turk, Emily Young, Britain’s greatest living stone sculptor, the underappreciated Elizabeth Frink and Thomas Heatherwick, the designer of the Olympic Cauldron and Routemaster bus, the works are challenging and beguiling in turn, ranging from giant origami, an androgynous shepherd, stone angels, a snapshot of a notorious murder to even an enormous nail.

Ildiko Bita is a lawyer, City of London Guide, and keen photographer. She has lived and worked in London for over 30 years and has a particular interest in art and Roman and medieval London, having recently completed an MA in Medieval Studies. She is a member of Six in the City walks and guides at the Guildhall Art Gallery, Roman Bathhouse, Billingsgate and during Open House.