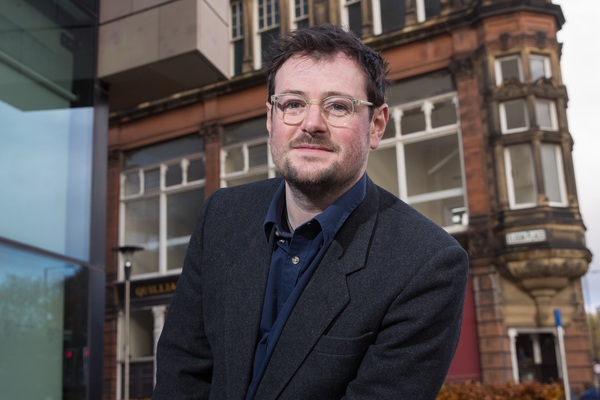 Writer and curator Owen Hopkins introduces the Farrell Centre, due to open in Newcastle in early 2022
3 Feb 2022 6:25pm

In this talk architectural writer and curator Owen Hopkins introduces the Farrell Centre, a unique public centre for architecture and cities. He will be Director of this Centre which is due to open in Newcastle in early 2022.

The Farrell Centre project was instigated by Sir Terry Farrell and established by Newcastle University. The project emerges from the belief that the forces shaping the present and future of cities – whether architectural, in the context of planning and public policy, technological and digital, economic and environmental, social and cultural – should be of vital public concern.

The Farrell Centre will be a new type of public institution: part research hub, part civic space, part gallery and museum. It will run exhibition programmes, public talks and debates, organise workshops for schools, young people and community groups, make publications and commission projects. Hopkins introduces the project and explores the various considerations – practical and philosophical – that are shaping its development and how it looks to realise its mission.

Owen Hopkins was previously Senior Curator of Exhibitions and Education at Sir John Soane’s Museum and before that Architecture Programme Curator at the Royal Academy of Arts. He is curator of numerous exhibitions, including most recently at the Soane Museum, Langlands & Bell: Degrees of Truth (2020), Eric Parry: Drawing (2019), Code Builder (with Mamou-Mani Architects), Out of Character (with Studio MUTT), The Return of the Past: Postmodernism in British Architecture (all 2018) and Adam Nathaniel Furman: The Roman Singularity (2017). His previous exhibitions and displays at the RA include Origins: A Project by Ordinary Architecture (2016), Urban Jigsaw (2016) and Nicholas Hawksmoor: Architect of the Imagination (2012).

He has written widely on architecture for publications such as The Independent, CNN, Dezeen, Domus, Icon, The Architectural Review, Blueprint, Architecture Today, The Architects’ Newspaper, topos, The Architects’ Journal, Building Design, Apollo, and The Burlington Magazine. An experienced public speaker, Hopkins has lectured internationally at institutions such as Yale School of Architecture; University of Oxford; Vizcaya Museum and Garden, Miami and the Courtauld Institute of Art, London. He is a regular guest critic at a number of architecture schools, and has been a judge for the BD Architect of the Year Awards, the AJ Architecture Awards and at the World Architecture Festival. He has appeared on BBC2 Newsnight, BBC Look North, ARTE, the European culture TV channel, BBC Radio 3, BBC Radio London, and Monocle Radio.

A fascinating talk, given by a highly regarded speaker - NOT TO BE MISSED.

Booking can be made via Eventbrite here